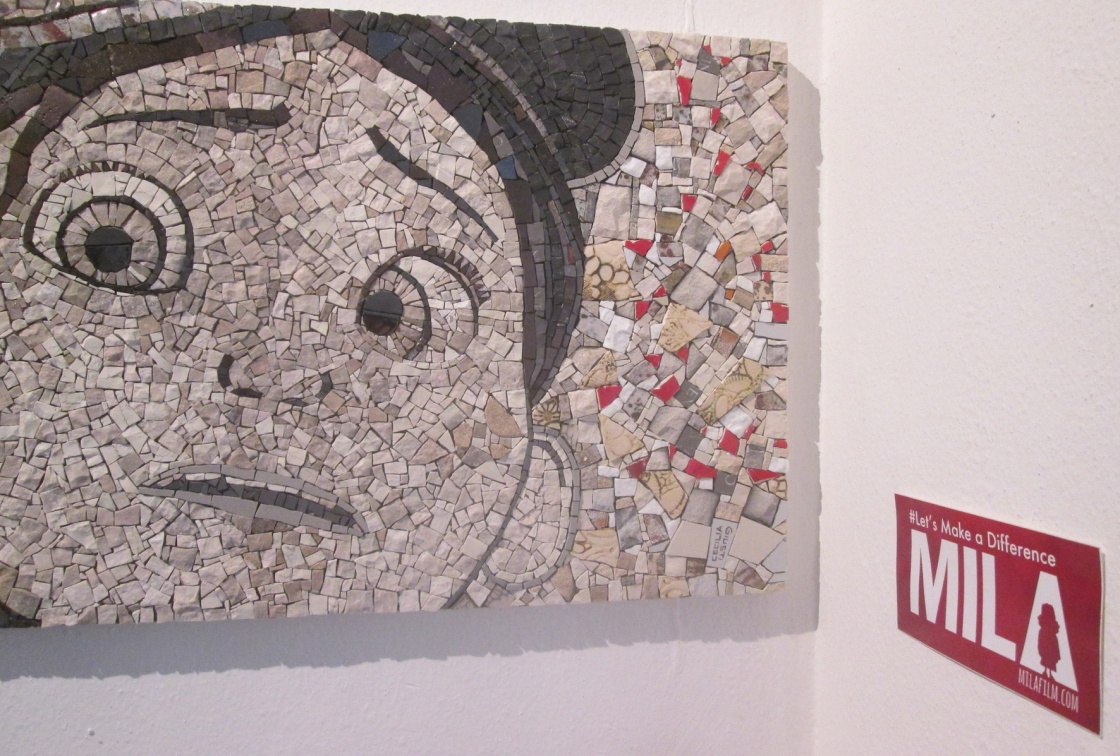 The story of my mother, Ester Rivi, is the reason I fell in love with MILA and I decided to dedicate her a mosaic.

I have never met my grandfather, who died in 1944 in Flossenburg, the German concentration camp where he was deported for being an antifascist. I never knew what his face looked like, since my mother, who lost her mother at eight years old, was in an orphanage when her father died (after years of being on the run first and of prison later on). Not even as an adult had she been able to find a picture of him.
I was with her when, at the Historical Institute of Modena, we opened a folder with her grandfather’s name on it, Gisberto Elia Rivi. I remember the look of excitement of my mom, who, at almost 70, was finally going to see her dad’s face! But the envelope (marked by the words “contains four pictures”) was empty…

I can’t image what expression my mother would make today if she could see Mila’s mosaic. But I know that this precious little movie gave me the feeling to see (and don’t just imagine) the fears that she felt as a child.

Cinzia Angelini (Mila’s director) has written the following about my mosaic, while it was under construction “Every fragment makes me think about the hope each one of us has to change things and to protect the little ones in the middle of the war! Thank you!.”

But instead it’s me who has to – and want to – thank her (and all the artists and professionals on Team Mila) because they gave me a chance to pay tribute to Ester and Gisberto, to my mother and grandfather. Through this mosaic, one tesserae after the other, a fragment after the other, I have put together many pieces of memories. I have reread the articles of that time, found by my mother, who, to reconstruct his grandfather’s journey without return, took archivist classes and investigated for years in the vain hope to find at least an image to give a face to his dad.

During this research, we met Vittore Bocchetta (artist and anti-Fascist intellectual in Verona), a Flossenburg survivor. It was then, for the first time, that, wrapped in the embrace of Vittore, I managed to imagine my mother as a child.

I don’t know how she survived to such pain and fear a child should never be allowed to experience. From her tales, I know that reading and culture had been critical. She became a nurse, then a teacher, then a city clerk. Several jobs, many open competitions, an endless determination to give her daughters what she couldn’t receive as a child. I think it’s the same determination that today drives distant populations to undertake very long travels to reach peaceful places where to live, work and raise one’s children.

But such ideal, peaceful places, do not exist. And they certainly cannot be represented by the same countries that, in the name of an alleged cultural superiority, from one side want to bring democracy, and from the other sell weapons to the same dictators who force their oppressed people to seek a future elsewhere.

That is why a mosaic dedicated to children victims of war is a little thing, a fragment among thousands of splinters of violence (and indifference) that kill children and adults in every part of the world.

I chose to focus, for my mosaic, on a close-up of Mila, in whose gaze I see my mother’s intense eyes.

A war survivor, she devoted so much effort in helping his daughters to know and to cherish the memory of those years.

This mosaic, with its hundreds of tiles and fragments, is a small and immense thank you for the legacy of reflections and awareness that she donated to his family and anyone around her.
She could never find a picture of her grandfather, but love is in the heart. And I hope that Mila’s story will enter the heart of many people.
I’m not a religious person, quite the opposite. My only faith lies in the intelligence of humanity, in the importance of the culture of memory and the infinite power of imagination.